“Ah. Well those are the hoodwinks, they're the naughty ones. They make dreams too, only their dreams are horrid...” — Ruff and Tumble's mother

Hoodwinks are small enemies and the malicious counterparts to the winks, crafting nightmares instead of dreams.

They are characterised by their green spherical body, yellow horns, single tooth and the loud ravenous sounds they make. They can also hide in chests, so players need to prepared each time they open one.

Hoodwinks are abundantly found all over the dream realms and in most of their nightmares, having created them in the first place.

Somehow Nitekap managed to create or gain control of all the hoodwinks and ensured they do his bidding. Nitekap then instructed them to kidnap all 40 winks and contain them in their nightmares.

Hoodwinks have a both a ranged and melee attack. At range they will spit a green projectile (presumably acid) at the player and up close they will scratch with their claws.

The hoodwink's name is derived from the English idiom "to be hoodwinked" which means to be deceived. 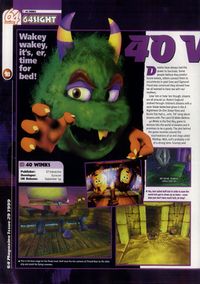 A hoodwink from 64 Magazine.
Retrieved from "https://40winks.gamepedia.com/index.php?title=Hoodwink&oldid=773"
Categories:
Hidden category: