40 Winks is a 3D action platforming game developed by Eurocom, published by GT Interactive, and released in 1999 for the PlayStation One. The title comes after the phrase forty winks; “To take forty winks is to take a nap for a short period of time (usually not in bed), or to take a short sleep during the day.”[2]

The plot of the game is that Nitekap, the main antagonist has become deprived of sleep, and doesn't want anyone else to sleep well. With the help of his sidekick Threadbear, Nitekap kidnaps the 40 winks who create good dreams and replaces them with evil hoodwinks, which create nightmares. The player choosing between the 2 playable characters and brother and sister; Ruff or Tumble has to embark on a journey through the dreamworlds and rescue the imprisoned 40 Winks.

Originally there was a Nintendo 64 planned, and essentially the game was finished with copies that were sent out to critics and an eventual ROM leaked online, but because of poor financial decisions only the PlayStation version was released, most likely due to cartridges being expensive at the time. 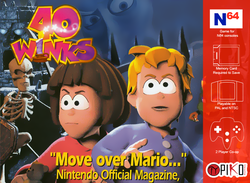 On January 30th 2018, Piko teased 40 Winks on their Twitter feed with a picture of a candle, saying "Something is happening...".[3] Sometime in February the Kickstarter was launched and the $20,000 base funding was met that same day. The Kickstarter campaign was met with acclaim, concern and criticism from retro gamers.

The main draw of the finished Nintendo 64 version would be the inclusion of a split-screen multiplayer co-operative mode that was absent from the PlayStation release. A trade-off presumably due to the lack of storage on the cartridge, would be the removal of the full-motion video (FMV) cutscenes which would instead be rendered in the game's engine with dialog displayed in a text box.

Piko's campaign offered an additional port to Microsoft Windows via emulation, though Piko have also stated interest in a native port.

On 14th March 2018, the 40 Winks Kickstarter ended with $131,252 far exceeding the $20,000 minimum. Every stretch goal was met with the exception of the Dreamcast port. However Piko has stated that they have interest in making a separate Kickstarter for a Dreamcast port.

At the time of its launch, 40 Winks received mostly mixed reviews from publications such as Gamespot and IGN. As of March 2018, there is no Metacritic[4] or OpenCritic score. Overall most of the reviews in total average out to be a 5, because of the poor camera and bland gameplay

Gamespot posted a review by an anonymous contributor on the 13th June, 2000 with a score of 4.4/10. The review recommended the game to children, but suggested that it wasn't a quality platformer in a genre with many entries.[5]

IGN posted a review by Mark Nix on the 22nd December, 1999 with a score of 5.5/10. The review criticised the game's difficulty, camera and stated that the game was poorly designed in attempt to imitate the success of Mario 64.[6].

As of 22nd October 2018 there are no Steam reviews. However several users have created threads in the game's Steam discussion boards regarding problems with saving, framerate drops and an "ugly black filter"[7], along with criticising the game's graphics.[8]

40 Winks is considered a niche game in the speedrunning community, resulting in few "official" speedruns. There are currently only 2 speedruns on speedrun.com, neither of them 100%. The leader is CavemanDCJ with a time of 29 minutes and 43 seconds, and a little far behind is bangerra with a time of 34 minutes and 1 second. There are only around 10-25 speedruns available on YouTube.